We have three different holidays for the whole Northumberland coastal route - choose from 4, 5 or 6 days walking, depending on how far you want to go each day. For each holiday there's the option of adding an extra day to walk across the sands to Holy Island. 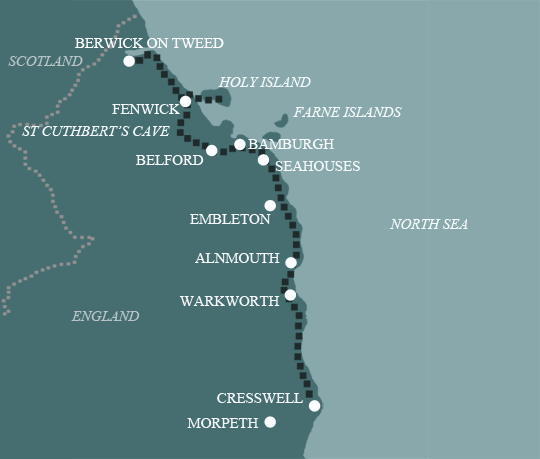 This is the middle length holiday covering the whole of the Northumberland coast path, taking 5 days to walk the official 64 miles (103km). The longest day is 15 miles and the two shortest days are 11 miles.

Cresswell – Alnmouth
After spending your first night in Morpeth, a taxi will take you to Cresswell. The route starts in Cresswell village and follows 8 miles of the sandy Druridge bay to the fishing port of Amble. Offshore Coquet Island can be seen, where there are large seabird colonies. The river Coquet is then followed upstream to Warkworth, dominated by Warkworth castle, the ancient seat of the Percy family.
On leaving Warkworth, the route quickly returns to the beach and onwards to Alnmouth. The Aln Estuary provides an important habitat for migratory birds and other wildlife. Alnmouth was once Northumberland’s major port, today’s hotels and guesthouses were once vast silos storing wheat.

Alnmouth – Seahouses
Continuing north, the path passes through Boulmer, one of the only true remaining Northumberland fishing villages, having changed very little in over 100 years. It’s then on to Craster, another fishing village dating back to the 17th century, famous for the kippers produced in the village smokehouse.
Just beyond Craster, the route reaches the imposing ruins of Dunstanburgh Castle, originally built in the 14th Century by Thomas Earl of Lancaster. Puffins and guillemots nest on the cliffs below.
The rest of this section is characterised by the two long sandy beaches of Embleton and Beadnell Bays, a haven for birdwatchers and beach goers! Low Newton is home to sea and shore birds, whilst the nearby pool with its bird hide is a good place to see wildfowl, especially in winter.
Beyond Beadnell the route continues along the coast to Seahouses, once an important fishing port and now a centre for the local tourist industry. Boats can be taken from the harbour to the Farne Islands, a cluster of small islands lying just offshore.

Seahouses – Fenwick
From Seahouses harbour head towards the village centre to then pick up the coastal path towards Bamburgh. Founded in 547 by King Ida, Bamburgh was once the capital of ancient kingdom of Northumbria. Perched on a basalt outcrop, Bamburgh Castle now dominates the village.
Just after Bamburgh you will reach the vast sands of Budle Bay, a National Nature Reserve and an important habitat for waterfowl. Holy Island and Lindisfarne Castle can be seen across the water.
The quiet village of Belford sits below the Kyloe Hills on the fringe of the fertile Northumberland coastal plain. A change of scenery follows as our route heads inland, woodland and farmland replacing seascapes. The route briefly visits the hills and passes close to the dramatic sandstone overhang of St. Cuthbert’s Cave. Near to Fenwick you will pass through Kyloe Old Wood, which in the 19th Century was owned by the Leyland family of nearby Haggerston Castle.

Fenwick – Holy Island (Optional day)
Originally known as Lindisfarne, Holy Island is only accessible at low tide,* either by the causeway (approximately 3 mile walk) or by the Pilgrims’ Way across the sands (not recommended). As well as its many historic attractions, Holy Island is situated at the heart of the Lindisfarne National Nature Reserve. If you wish to take this option, please select a rest day at Fenwick. (The Castle is closed on Monday’s). *check tide times.

Fenwick – Berwick-upon-Tweed
The final stage starts near the causeway to Holy Island, it then heads north through some of the remotest areas of the coast. Cliff top paths and more beaches lead to historic Berwick-upon-Tweed, the capital of the Borders, with its magnificent town walls, spectacular riverside and three bridges, the oldest of which was built in 1624. Take time to explore this lovely old town and in particular the Victorian ramparts.

This is a mainly flat coastal walk, and can be completed by people with limited walking experience.

Terrain: Flat walking along the edge of the coastal plateau. A small excursion into the low lying Kyloe hills. Coastal paths, and country lanes, beaches, a couple of sea cliffs, and a golf course or two!

What’s it like underfoot? On the whole the paths are well defined and maintained, but at times a bit sandy. Walking in soft sand on the beach can get tiring – but there’s usually a parallel path further inland.

How much up & down? Not very much at all! Most days are pretty flat. The high point of the route, near St Cuthbert’s Cave, is only just over 200m.

General travel information for the Northumberland Coast area will be in your holiday pack including train and bus timetables where available.

Choose a rest day at Fenwick to allow an extra day to visit Holy Island. Holy Island is only accessible at low tide, either by the causeway (approximately 3 mile walk) or by the Pilgrims' Way across the sands (not recommended). The tide table is included in your holiday pack.

Originally known as Lindisfarne, the island has many historic attractions and is situated at the heart of the Lindisfarne National Nature Reserve. Please note that Lindisfarne Castle is closed on Monday's.

A string of dramatic castles along the coast punctuate your walk.

The serene beauty of the wide open bays of Northumbrian beaches are reason enough themselves!

Take an extra day to cross the tidal causeway to Holy Island with Lindisfarne Castle and Priory.

This is an easy, mainly flat walk on generally good paths - no need to over exert yourself!