We offer 3 itineraries along the full length of the Westmorland Way. The longer the itinerary, the shorter the distance you have to walk each day, allowing you more time to soak up the stunning scenery. 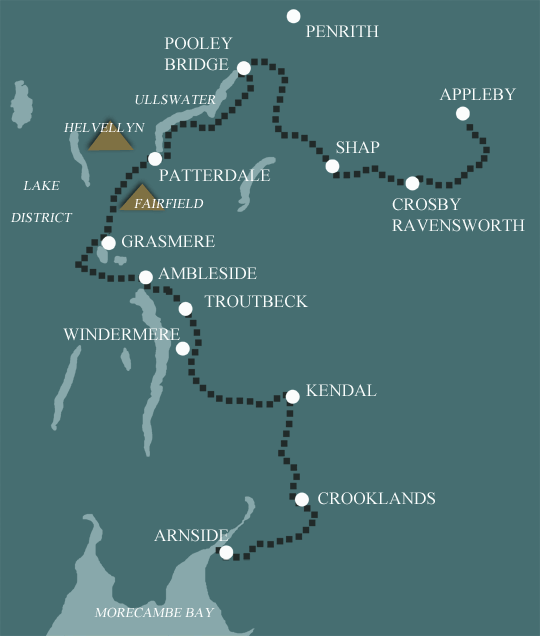 This is our shortest itinerary covering the whole of the Westmorland Way route. It is perfectly achievable by fit walkers who are used to longer days, but does involve long days on the first and last day, as well as a mountainous section between Patterdale and Grasmere.

The first day starts under the Pennines and ends on the fringe of Lakeland. Starting along the River Eden, the route leads through fields and quiet lanes linking Great Ormside and Great Asby, two lovely Eden Valley villages in between, the charms of Rutter Force are enjoyed. Carrying on over higher ground you will walk to Crosby Ravensworth, a secluded town. Shap is then reached by way of a stone circle and some typical limestone scenery. Although this is a fairly strenuous first day, the following days are considerably gentler. On leaving Shap you will walk past Keld Chapel and Shap Abbey before arriving at the river Lowther. Later, a climb up to the lovely village of Askham will provide you with some wonderful views. The route then drops down to a Norman church at Barton where you will meet the River Eamont. Follow the river to Pooley Bridge which is located at the end of Ullswater, England’s second largest lake.

From Pooley Bridge the walk climbs gently on to the slopes of Barton Fell, where easy routes lead past an impressive stone circle before commencing a classic descent towards Howtown, with tremendous views down to the Lake. The route then takes in isolated and scattered communities of farmsteads and churches before heading to the lakeshore for a fine walk to Patterdale. The villages of Patterdale and Grasmere are split by a high mountain range, the longest high level range in Lakeland. The initial miles are through the side valley of Grisedale which penetrates deep into the folds of the Helvellyn range, before a climb to Grisedale Tarn. From here it is a short descent to Grasmere, directly below you, the home of William Wordsworth’s Dove Cottage.

Between Grasmere and Troutbeck you will walk through central Lakeland and two popular valleys, finishing in a third. Three separate climbs will be encountered, all on easy paths and enjoying amazing views. From Elterwater in the beautiful Langdale valley, you will follow the river Brathay into bustling Ambleside. The final stretch encounters Jenkin Crag, which provides glorious views across Windermere (England’s largest lake) to the Langdale Pikes, before dropping down to this evening’s accommodation in Troutbeck. Troutbeck is famous for its beautiful 17th Century farmhouses with mullioned windows and tall cylindrical chimneys, so characteristic of Westmorland. From Troutbeck, field paths are largely used to approach the attractive fell of School Knot, a major local landmark, before charming undulating paths lead you to Underbarrow, in the Lyth Valley. A final climb up to Scout Scar with a picturesque walk along the edge is followed by a gradual descent into the medieval market town of Kendal, for your overnight accommodation.

The final day is the longest, but with a generally easy terrain. On leaving Kendal the river Kent will accompany you for several miles, before being replaced with the Lancaster Canal and its towpath with undulating countryside and fine views. Woodland paths take over and after climbing the Fairy Steps you will head down to the Pele Tower at Hazelslack. The final climb is 500 feet to the crest of Arnside Knott which leads to fine views over Morecambe Bay, before descending to the end of the walk, on the Kent estuary in Arnside.