Here’s a thought for you. At just over 30,000 square miles, Scotland accounts for over 30% of the total area of the United Kingdom, yet it is home to less than 10% of the UK population. Which leads me to suggest, if your idea of a perfect holiday is to escape the crowds, then maybe Scotland is the place for you.

With a blend of magnificent mountains,  moorland, enchanting lochs and miles of rivers along with dramatic coastline and gentle countryside, Scotland really does have something for everyone, while interestingly, keeping you pretty much away from everyone.

Let’s look at what we believe are six of the very best walking holidays in Scotland. 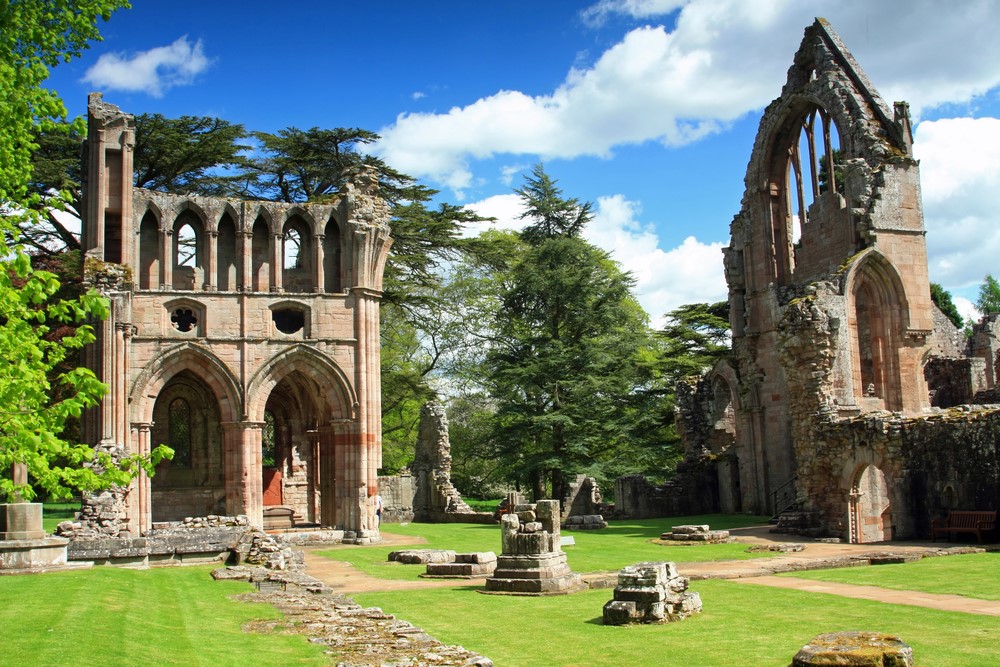 The ruined medieval abbeys of Melrose, Dryburgh, Kelso and Jedburgh, along with a host of historical sites tell the story of the battles that raged between the kingdoms of Scotland and England from the mid-12th to early 17th centuries.

For four centuries the abbeys fell victim to the lawlessness that engulfed the region. The most violent of times came during the Wars of Scottish Independence in the 14th century, when the Scots, led by Robert the Bruce succeeded in the re-establishment of an independent Scottish monarchy. In later years the abbeys saw further destruction at the hands of the cross border militias known as Reivers and later still, Moss Troopers.

History lovers should choose one of the longer itineraries on the Borders Abbeys Way as there’s so much to take in along the way. Melrose Abbey allegedly contains the heart of Robert the Bruce. Standing guard over the town are the Eildon Hills. The Romans occupied this area arriving circa AD80, building a prominent fort named Trimontium, ‘Place of the Three Hills’. Scottish historical novelist, poet, playwright, and historian, Sir Walter Scott who resided at Abbotsford House near Melrose is buried at Dryburgh Abbey. In Kelso, Scotland’s largest inhabited house, Floors Castle, overlooks the Tweed and houses exceptional collections of furniture, paintings, porcelain and tapestry. Mary Queen of Scots stayed in Jedburgh in 1566, and the visitor centre, a 16th century tower house set in attractive gardens, tells the story of her tragic life. These are just a handful of the many, many points of interest along the way.

History aside, with gentle gradients and gorgeous views, the walking between the abbeys is delightful. A combination of riverside paths, old drove roads, forest track and open moorland provide a truly magnificent environment that will captivate even the most seasoned of travellers.

Learn all about the Borders Abbeys Way 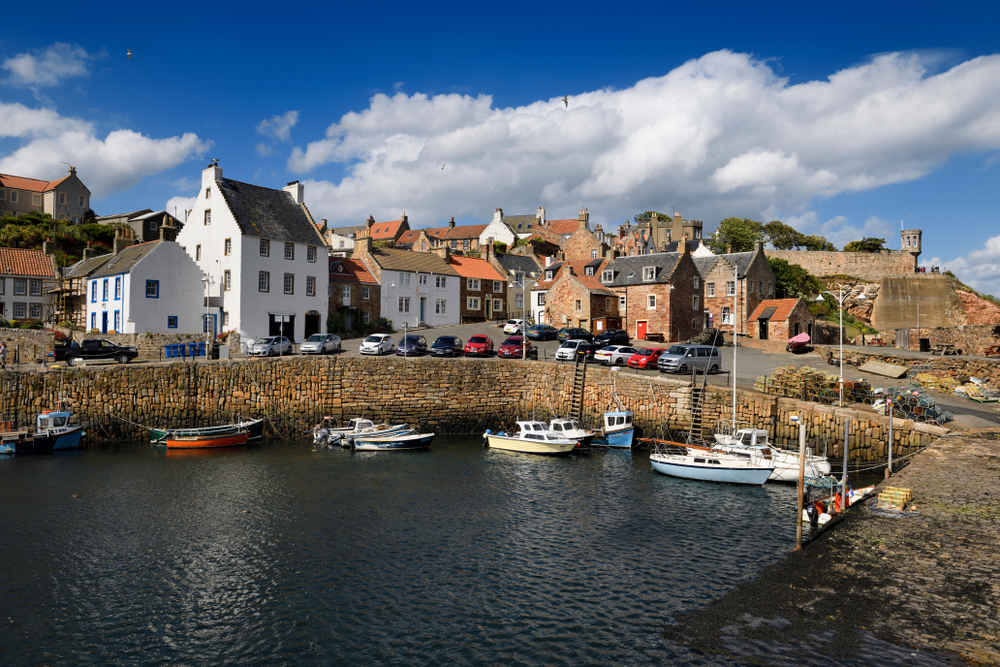 Grassy paths through golden sand dunes, clifftop walking, woodland and abandoned railway ensure the Fife Coastal Path, designated by Scottish Natural Heritage as one of Scotland’s Great Trails, is an absolute joy from start to finish.

From the Forth Estuary in the south, to the Tay Estuary in the north the trail is packed with delights including the iconic Forth Bridges and the Edinburgh skyline, Dysart Harbour with its popular Harbourmaster’s House, historic monuments, evidence of lava flows and limestone strata containing marine fossils, and many, much valued nature reserves.

Rest days are something we encourage. It’s an opportunity to put the trail on hold for a day and allow a little extra time to explore the area. The Isle of May National Nature Reserve sits 5 miles off the coast of Anstruther. There are boat trips out to the island most days from April through to September. Trips last around 4 or 5 hours with half that time on the island itself. Up to 250’000 seabirds can nest on the island. These can include Puffins, Shags, Razorbills and Guillemots. Approximately 150 seals live around the island. Also in the water, look out for Porpoise and Dolphin. If you’re especially lucky, you might even spot a whale!

Learn all about the Fife Coastal Path 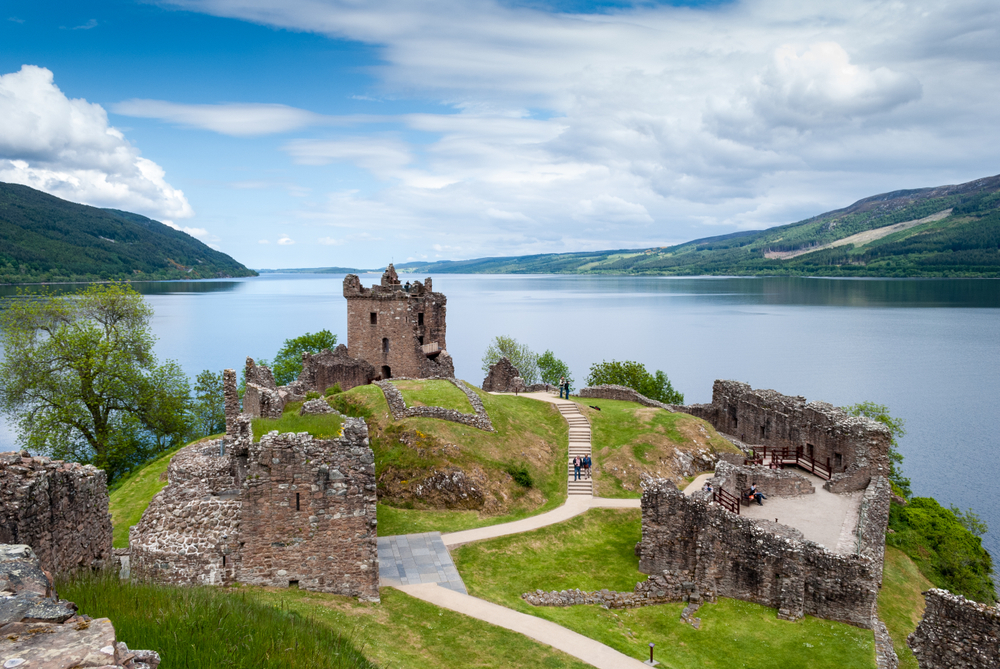 There’s always something pretty special about walking from coast to coast. Add Scotland into the mix and you have something really spectacular.

The Great Glen Way follows canal towpaths, loch shore paths and forestry tracks as it journeys from Fort William on the Atlantic west coast to the capital of the Highlands, Inverness, on the North Sea. The walking is easy and the navigation straightforward, leaving you free to really enjoy the sublime scenery around you.

Towering over Fort William is Ben Nevis. At 4409 feet it is Britain’s highest mountain. Seasoned walkers can factor in a ‘rest day’ and take the opportunity to scale the peak. A word of warning, it’s a long day, and the weather can be unpredictable, so if taking the challenge, make sure you are hill fit and both wearing and carrying the appropriate clothing as well as packing safety essentials.

The Caledonian Canal is 60 miles in length and reaches a height of 106 feet above sea level. Two thirds of the canal is formed by the lochs of Loch Dochfour, Loch Ness, Loch Oich, and Loch Lochy which run along a geological fault in the earth’s crust. The remaining third of the canal is man-made. There are some fine examples of engineering along the way with four aqueducts, ten bridges and no fewer than 29 locks, eight of which are at the famous Neptune’s Staircase at Banavie, built by Thomas Telford.

Easy walking on well-made paths makes the Great Glen Way and excellent choice for those wishing to experience the majesty of the Scottish Highlands without having to trek over mountains to do so.

Learn all about the Great Glen Way 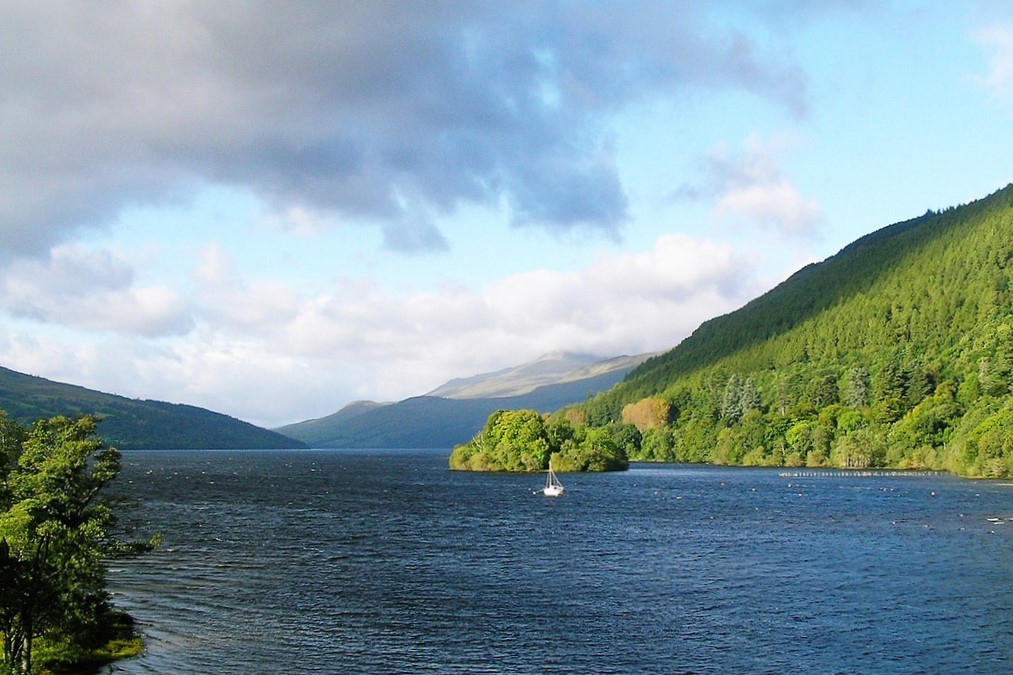 The Rob Roy Way travels from Drymen up to Pitlochry, in and around many locations associated with the now legendary outlaw Rob MacGregor. There’s history, heritage and also wildlife in abundance along the way and the scenery is absolutely spectacular.

In the main, the trail is on good, quiet terrain with little exposure and can therefore be enjoyed really quite comfortably by most walkers.

Highlights of the Rob Roy Way include the extensive Loch Ard Forest between Drymen and Aberfoyle as well as a glorious walk through the Menteith hills to Loch Venachar and on into Callander. Between Strathyre and Killin consider taking the optional diversion to visit Rob Roy’s grave at Balquidder. Walking from Killin to Ardtalnaig the trail climbs through the forest into the hills on the southern banks of Loch Tay with fine views over the rugged Trarmacan Hills and Ben Lawyers. On the Ardtalnaig to Aberfeldy leg take time to savour the two magnificent gorges, the Falls of Moness and the Birks o’ Aberfeldy.

Consider adding a rest day in Pitlochry at the end of your holiday. The town sits on the river Tummel which was dammed in the 1950’s and a fish ladder built to allow the thousands of salmon to swim upriver in their annual migration. There is in an interesting walk past the fish ladder and the viewing chambers where you may spot a salmon going upstream!

Learn all about the Rob Roy Way 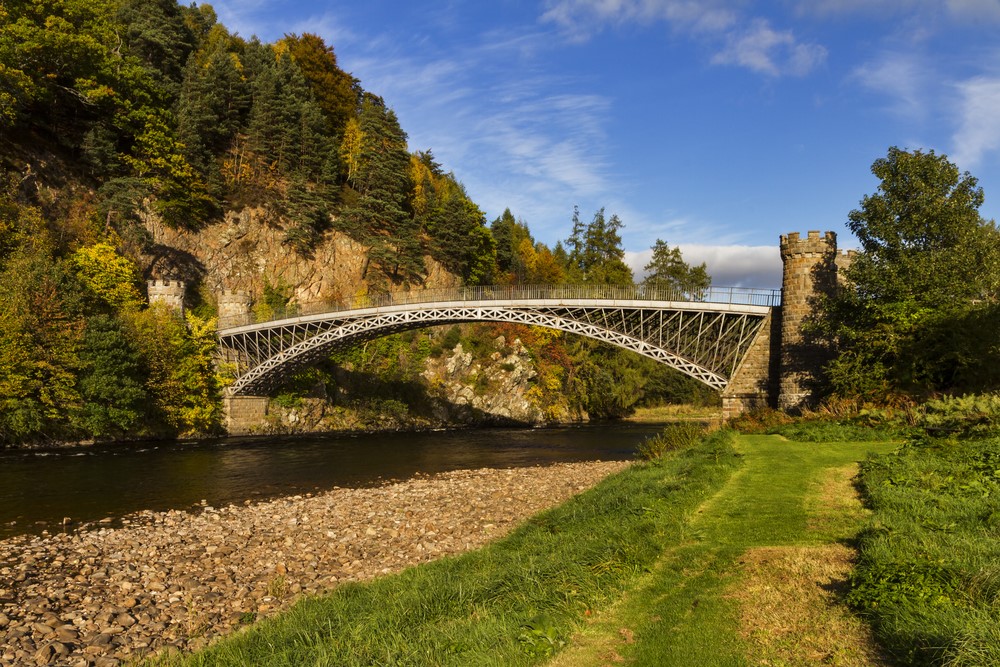 Setting off from Buckie on the Moray coast the Speyside Way follows one of Scotland’s longest rivers through the heart of malt whisky country towards the foothills of the Cairngorms.

It is a scenic walk along river banks, through woodlands and over hills. Route finding is easy and the walking never too difficult, allowing you to switch off and really enjoy the peace and tranquillity of this quiet corner of Scotland.

One of the most eagerly anticipated locations on the Speyside Way is Ballindalloch. Lying between the banks of the River Spey and Ben Rinnes, Ballindalloch is a rural community, in the heart of Speyside. At its centre lies the magnificent Ballindalloch Castle, one of the most beautiful castles in Scotland and known as the ‘pearl of the north’. A visit to the Castle and its gardens will be a real highlight of your walking holiday. Both the Cragganmore and Glenfarclas distilleries can be found in the small community of Ballindalloch and they do offer tours. You may consider having a rest day factored in for the following day!

A town worthy of further exploration is Grantown-on-Spey, an elegant Georgian town situated in the heart of the Spey Valley, surrounded by majestic scenery and supporting a wide variety of wildlife. Visitors can visit the Grantown Heritage Museum or the delightful Revack Estate with attractive gardens, an orchid house and nature trails.

Learn all about the Speyside Way 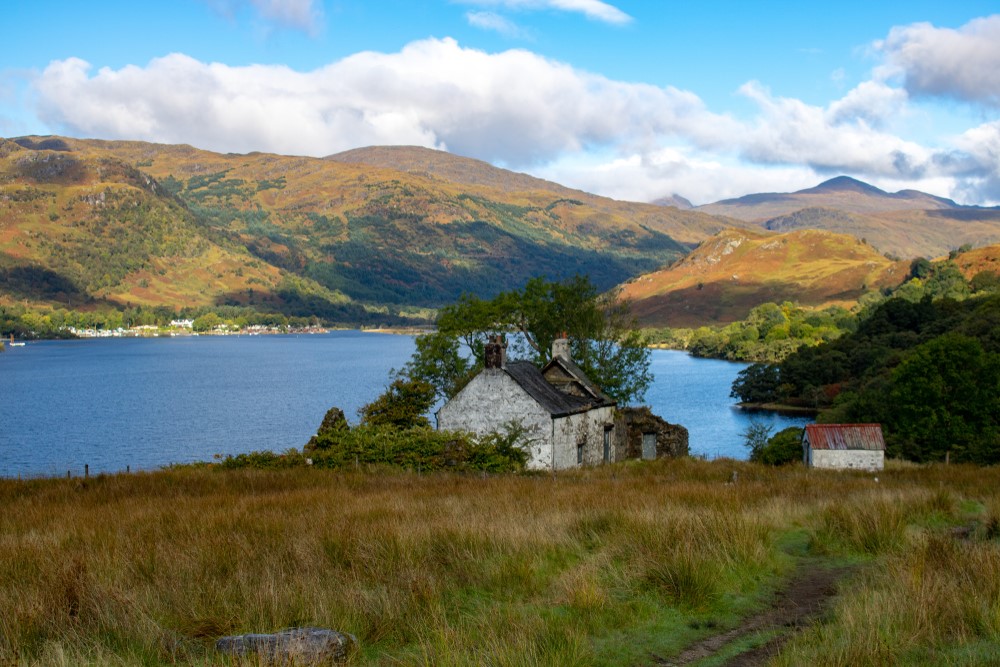 The West Highland Way was the first long distance footpath to be established in Scotland. It’s a magnificent journey through Scotland’s history, following in the footsteps of drovers, pilgrims, soldiers and clansmen.

This stunning trail from Milngavie near Glasgow to Fort William in the Highlands offers tremendous variety. You’ll walk alongside picturesque Loch Lomond, over the isolated but beautiful Rannoch Moor and enjoy dramatic mountain scenery culminating in views of Ben Nevis, the highest mountain in Britain.

Conic Hill between Drymen and Balmaha is a popular point on the trail. Following a short steep climb to the summit you are rewarded with tremendous views of Loch Lomond. At 23 miles long, it’s the largest body of fresh water in Britain.

When walking from Inverarnan and Tyndrum consider taking a short detour to enjoy fabulous views of the Falls of Falloch. They’re a stunning sight, particularly when in spate.

Perhaps one of the most photographed sights on the West Highland Way is the magnificent Buachaille Etive Mòr, one of the most recognisable mountains in Scotland. The pyramid like shape first comes into view as you cross Rannoch Moor but it’s not until you leave King’s House in the direction of the Devil’s Staircase that the full beauty of the mountain is revealed.

Despite its daunting name, the Devil’s Staircase is actually one of the most popular sections of the West Highland Way. This ancient drove road is part of the Military Road between Tyndrum and Fort William. Once at the top you’re rewarded with fine views of Rannoch Moor and Glen Coe and on a clear day you can see Ben Nevis and the Mamore mountains.

It’s little wonder the West Highland Way is one of the most popular holidays in the country.

Learn all about the West Highland Way