Striding Out on St Oswald’s Way

At the end of September I had the opportunity to get out on my first staff familiarisation trip.  I chose St Oswald’s Way. I was joined by my husband Stan, and we simply loved every minute of it. We are lucky enough to live in the Lake District and love walking on the fells, but we so enjoyed walking a different landscape along the beautiful and unspoiled Northumberland Coastline.

We chose St Oswald’s Way but, due to time limitation, opted for the Coastal Highlights short break itinerary of 4 days walking (5 nights) as far as Warkworth, which suited our timescale perfectly. If we’d had more time we would definitely have opted to do the full route and maybe we’ll get chance in the future, so that we can say we have followed in the footsteps of St Oswald, King of Northumberland in the 7th Century, and who played a major part in bringing Christianity to the region.

After an initial section inland between Lindisfarne and Belford, the path followed the stunning Northumberland coastline down to Warkworth and was an easy, enjoyable mixture of lovely woodland paths, open farmland, sand dunes and beaches, dotted with several castles along the way!

Our itinerary would normally have started with a first night on Lindisfarne but due to our timescale we were doing things slightly differently by having our first night just inland from Holy Island at Fenham. However, before we arrived we had just enough time for a quick drive over the causeway to Lindisfarne (due to tide times being in our favour!), and enjoyed a quick, breezy walk around the island to see the priory ruins, the parish Church of St Mary and of course the wonderful Castle, majestically perched on a rocky outcrop at the south east point of the island. 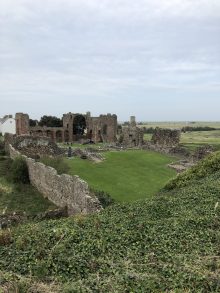 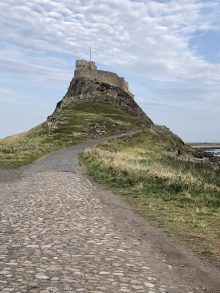 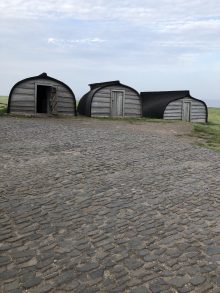 After a peaceful night’s sleep followed by a lovely breakfast we started our adventure firstly by bumping into the luggage courier John who covers this section of the route. It was lovely chatting with John about his work and the challenges he faces, particularly coping with the changing tide times permitting access to Holy Island. We felt lucky to see him, as usually luggage couriers work tirelessly behind the scenes, moving bags seamlessly from location to location, but are probably very rarely seen by our guests.

After chatting with John we headed off across the fields from Fenham to meet the St Oswald’s Way path just as it heads inland from the Holy Island causeway.  From here the route passes through the tiny hamlet of Fenwick before skirting along the edge of Kyloe Woods, a designated red squirrel reserve. Then it was a pleasant woodland path through Shiellow Woods, gently climbing before emerging onto an open track with lovely views across to Holy Island, Bamburgh Castle and even the Farne Islands in the far distance. It was a lovely late September day and the sunshine was pleasantly warm. 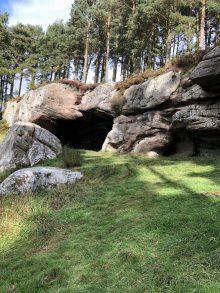 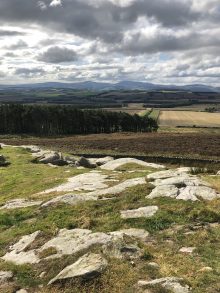 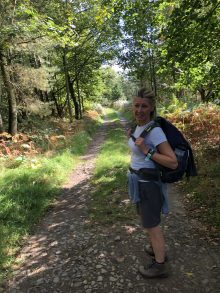 It wasn’t long before we reached the gateway where St Oswald’s Way and the Northumberland Coast Path are met by St Cuthbert’s Way and where we decided to take a short detour to visit St Cuthbert’s Cave, which was definitely well worth the extra effort. The Cave is a natural sandstone overhang hidden in woodland and is apparently one of the places where the Lindisfarne Monks stopped to rest when fleeing Viking attacks in 875, taking the sacred remains of St Cuthbert with them. After visiting the cave we retraced our steps back up through the wood and found a rocky outcrop where we stopped to eat our packed lunch. It was a peaceful spot to sit and enjoy the beautiful views inland over to the Cheviot Hills and across to Holy Island, still just visible in the distance.

After lunch we rejoined the path and the remainder of the day’s walking was through a pleasant combination of woodland and farmland, before reaching the small market town of Belford, where we were welcomed by our friendly accommodation hosts into their beautiful period home where we enjoyed another peaceful night’s sleep.

We headed out of Belford fuelled up on a unique breakfast of homemade ‘yoganola’ and breakfast pot soufflés. It wasn’t long before the path took us along the back of a large number of huge silos which are a co-operative owned and run grain storage facility. They may not be the prettiest, but the facility plays a major role in the storage and marketing of crops for farmers and grain buyers across Northumberland and the Borders.  Looking at the wonderful farmland around us it was obvious to see how important farming is to the local economy.

The route then took us through farmland towards Spindlestone Heugh, passing Spindlestone Ducket on the way. The Ducket is an iconic four storey tall tower, originally thought to be a dovecote built on the site of a medieval moated farmstead. Today however the Ducket serves its purpose as a rather unique holiday cottage! It was here that Stan and I stopped a while to watch a farmer ploughing being followed by hundreds, if not thousands of seagulls, which was quite an awesome sight to see.

Soon we got our first glimpse of Budle Bay, part of the Lindisfarne National Nature Reserve, and got a sense of our proximity to the coast. We also passed though the first of several golf courses along the route. In his younger days Stan used to be a keen golfer, so he really enjoyed stopping to watch and even chatting to the players as we followed the markers across or alongside the courses. Caution is required to watch out for flying golf balls but players on the course seemed well aware of the presence of walkers. 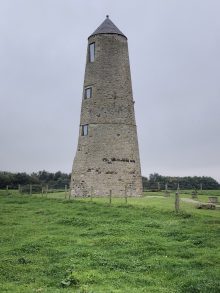 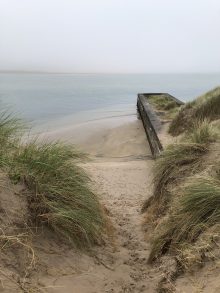 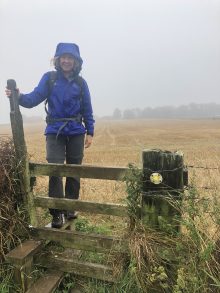 Just beyond Budle Point we reached a World War II pillbox in the dunes and from here it wasn’t far until we reached Bamburgh where we stopped for our packed lunch and grabbed a coffee. At this point the weather started to close in and Bamburgh Castle, which dominates the village, soon became shrouded in mist heralding the approach of rain.

Leaving Bamburgh the path heads slightly inland across agricultural land towards Seahouses. If the weather had been clearer we should have been able to enjoy distant views of the Cheviot Hills and the Farne Islands, but sadly we could see neither!  It wasn’t long before the mist turned to rain and by the time we reached Seahouses it was tipping down!  We had arrived a little early, so spent a while wandering around the harbour where there was lots of renovation work taking place on the harbour walls. By the time we checked in we were really quite wet, but were greeted with a smile and warm welcome from our hosts, who very kindly insisted on taking our boots and coats to be dried overnight.

After another comfortable night and lovely breakfast we headed down to the harbour to rejoin the coast path. It was drizzling as we set off but it wasn’t long before it stopped and our waterproofs came off as we spent some time scrambling on rocks to the east of the harbour just as the sun tried to poke through.

As we left Seahouses the path would lead us through another golf course and then along the roadside adjacent to Annstead Dunes Nature Reserve. However, as the tide was out we opted to walk this section along the beach to Beadnell where we detoured into the village for coffee.  We then visited Beadnell Harbour to see the three disused limekilns which were originally used to produce lime by burning coal with limestone. 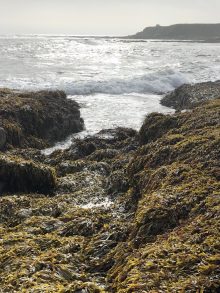 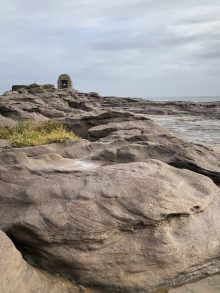 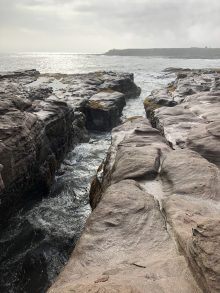 After a short walk along the beach we returned to the path through Toughall Dunes and crossed the footbridge over Nanny Burn. Then it was as easy walk along Newton Links (a designated Site of Special Scientific Interest) before arriving at Low Newton by the Sea where we stopped to admire the lovely 18th century fishermen’s cottages beautifully built in a square around the Ship Inn.

From here it would have been possible to walk all the way along the beach to Embleton Bay but we stuck to the official path through Newton Pool Nature Reserve which is a great place to see wildfowl and migrant waders. Soon the path led us up on top of the dunes and offered stunning views across Embleton Bay with Dunstanburgh Castle in the distance. 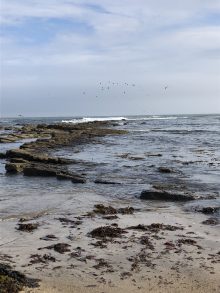 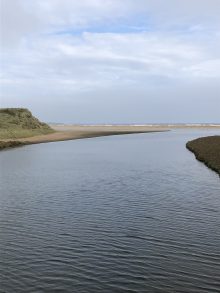 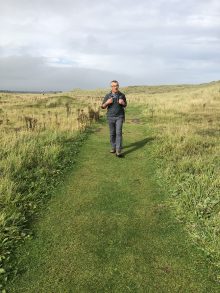 We soon turned off and headed into Embleton village to find our accommodation.

After another lovely breakfast we set off on our last but longest day of 15 miles. The weather was great, just a t-shirt and fleece required. The official path runs along the back of the golf course but as the tide was out, we couldn’t resist walking along the beautiful Embleton Bay beach which was simply stunning.

Apart from a few golfers on the course and early morning dog walkers, we hardly saw a soul as we strolled along the beach before rejoining the path just before the cliffs at Castle Point and on onward around the beautiful remains of Dunstanburgh Castle. 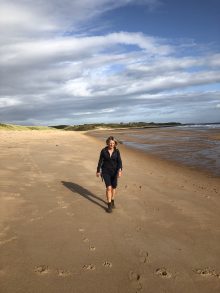 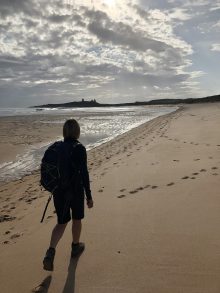 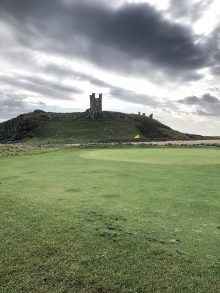 It was a short gentle stroll to the tiny village of Craster, famed for its kippers. As we walked up through the village to grab a coffee, we immediately could smell the distinctive aroma of the kipper smokehouse, which has been operating since 1856.

The next section of path hugged the coastline on a gently undulating but easy path towards Boulmer, once known as Northumberland’s smuggling capital in the 18th century, but now much better known as an RAF base and home to the 202 Squadron which operates the well known yellow Sea King search and rescue helicopters. 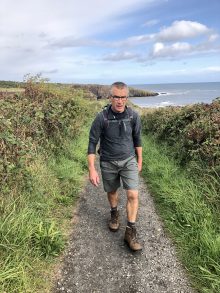 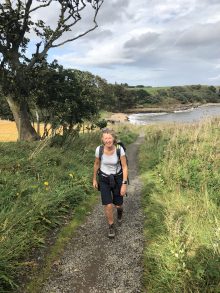 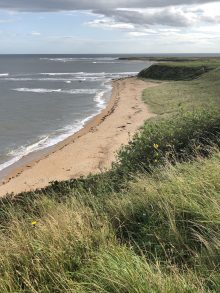 After leaving Boulmer it wasn’t long before the path took a small detour through Foxton Hall Golf Club, established in 1869 and the fourth oldest golf club in England. The path follows a route through the golf course before reaching the lovely village of Alnmouth where we couldn’t resist stopping in one of the lovely cafes for tea and cake.

The route of St Oswald’s Way then crossed the Duchess’s Bridge and takes a detour around the River Aln estuary. For a while the path joined the Coast and Castles Cycle Route and offered lovely views back across the fields to Alnmouth.

It wasn’t long however before the path turned back towards the sea and followed a pleasant grassy track along the back of the dunes where we eventually reached our turn off.  From here it was short walk up into the beautiful old village of Warkworth and checked into our beautiful accommodation. Before our evening meal we enjoyed a pleasant walk around the village which is dominated by the wonderful Castle sitting at the top of the main street. 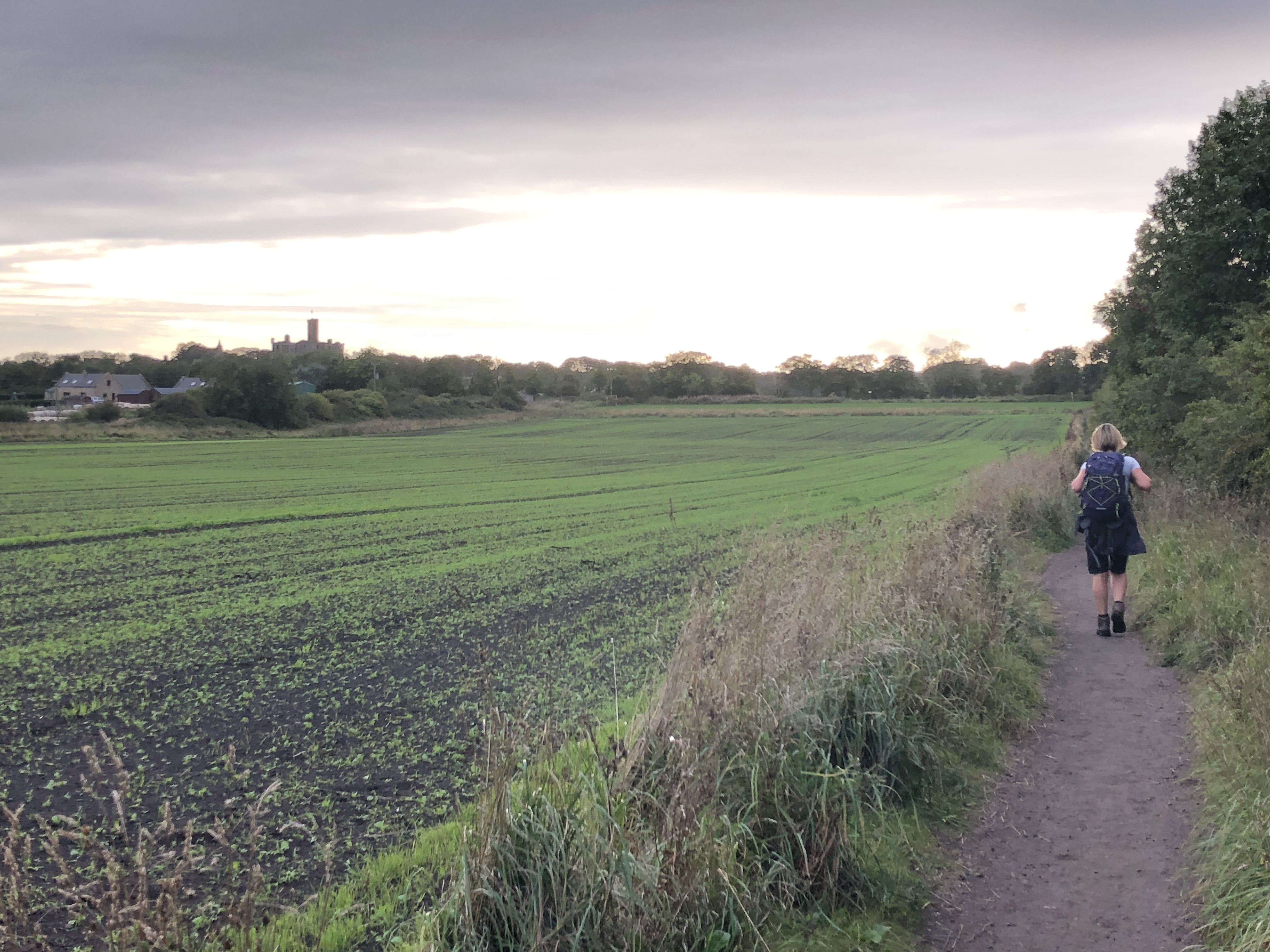 We thoroughly enjoyed our St Oswald’s Way Coastal Highlights itinerary and would highly recommend this for anyone looking for a short break or as an easy introduction to long distance walking. The unspoiled Northumberland Coastline is simply stunning and one certainly not to be missed – there is simply nothing not to like about this walk.

For more information on St Oswald’s Way email us info@mickledore.co.uk or to speak to Gill or any of our walking holiday experts, call 017687 72335.