Perfect Days on the Pembrokeshire Coast

In August I spent 5 days walking between Broad Haven and Newport on the Pembrokeshire Coast Path with my partner Gnash. Come and join us on our journey.

It was a cloudy start to our Pembrokeshire Coast Path adventure. The tide was in at Broad Haven beach and the sea was still. The day started with a small climb out of the village, followed by an easy walk to Newgale with a few gentle climbs. Within an hour the sun was shining and the temperature rising . Our walk took us past Newgale beach,  known as the most impressive sandy beach in Pembrokeshire, stretching for over 2 miles. You have a choice here of either walking along the road or on the beach. We decided to take the walk down the beach and stopped for a few minutes there admiring the view. The coastal path then climbs up a steep hillside out of the village and goes up and down for about 4 miles, before easing off a bit heading towards the pretty village of Solva. Having arrived quite early, we decided to have a cold drink in the sunshine, before checking into our accommodation for the night.

Today’s walk started from the harbour in Solva. It was mostly easy, flat walking following the obvious path along the cliff edge, which was quite exposed in places. The path took us past Caerfai Bay onto St Non’s Bay, where there was a small diversion in place due to ground erosion. The alternative path took us past the remains of St Non’s Chapel – the place where St David was born and St Non’s Well which is believed to have sprung up in thunderstorm during St David’s birth. It’s water was believed to have healing properties that helped cure people’s poor eyesight. From there we followed the path on low cliffs before arriving at the beautiful little harbour of Porthclais, where we could see some fine examples of lime kilns.

After that the terrain became a bit more rugged and wild and it wasn’t long before we could see the Ramsey Island in the distance. We were very to lucky to spot few porpoises playing in the sea as we were heading towards the St Justinian’s life boat station. From there we weren’t very far off our final destination of the day, Whitesands Bay from where we caught the bus to our overnight stop of St David’s – the smallest city in Britain, which feels more like a large village, but qualifies for this status due to its beautiful cathedral, which you can see on the picture below.

This morning we caught the bus back to Whitesands Bay to continue our walk. The weather was yet again very kind to us from the early morning. Today’s walk was somewhat different to the last two days. The path became more rocky with loads of steps in places and the terrain changed to heathland. The first section between Whitesands Bay and Abereiddy felt  very remote. It was on this section that we spotted a couple of seals in the sea, it looked like an adult seal playing with its pup. The path became quite busy as we headed towards Abereiddy beach with its famous Blue Lagoon (a flooded quarry) – a popular spot for coasteering. From there a much easier and flatter path took us past Traeth Llyfn beach before arriving at Porthgain Harbour. A gentle walk on low cliffs took us past edge of Trefin before the last 2 miles to our final destination for the day – Abercastle. Here we followed the path through the field and past a small stone circle. Not long after that we were on our final climb down to Abercastle, yet another pretty fishing village with a beautiful harbour. 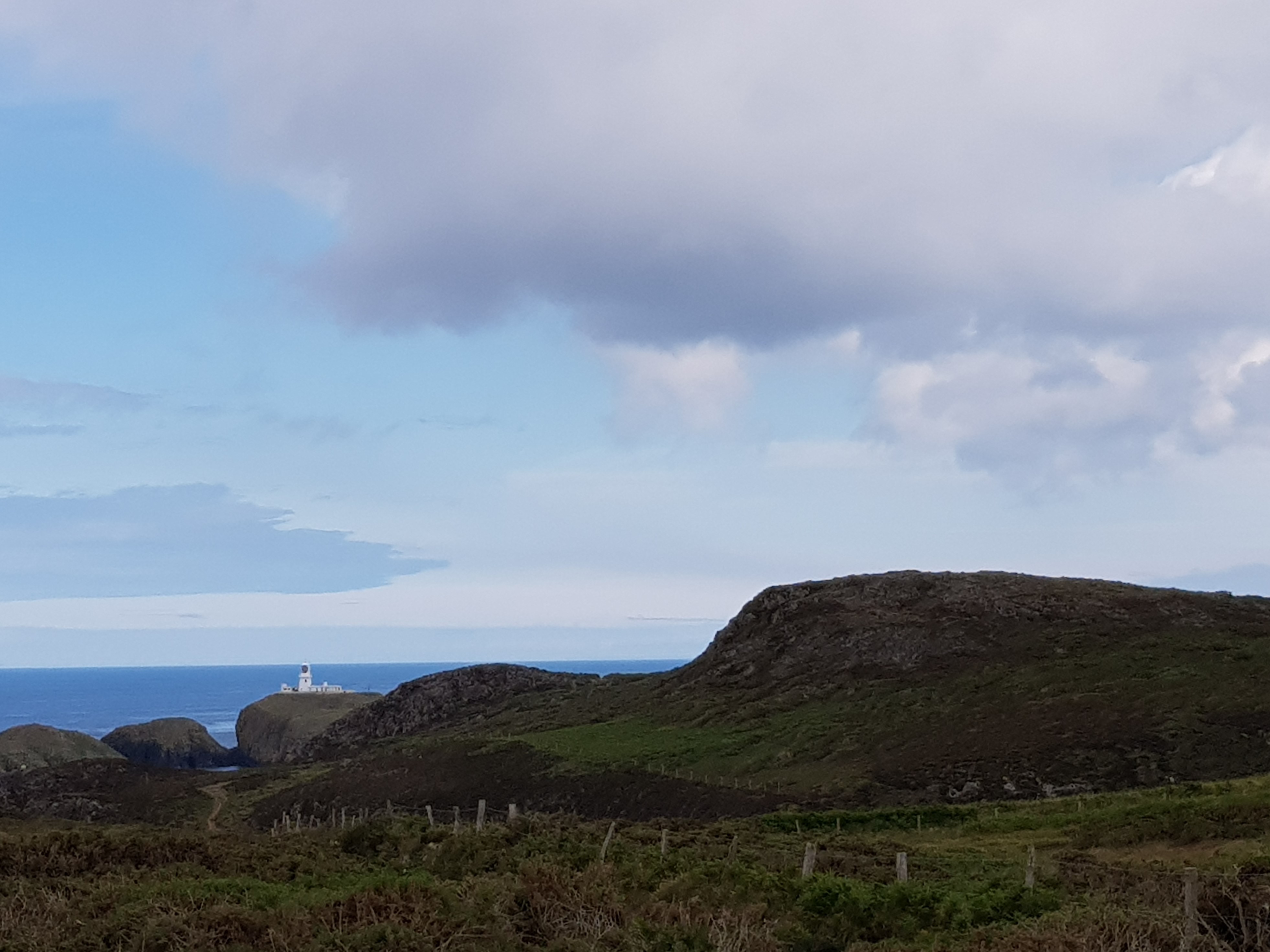 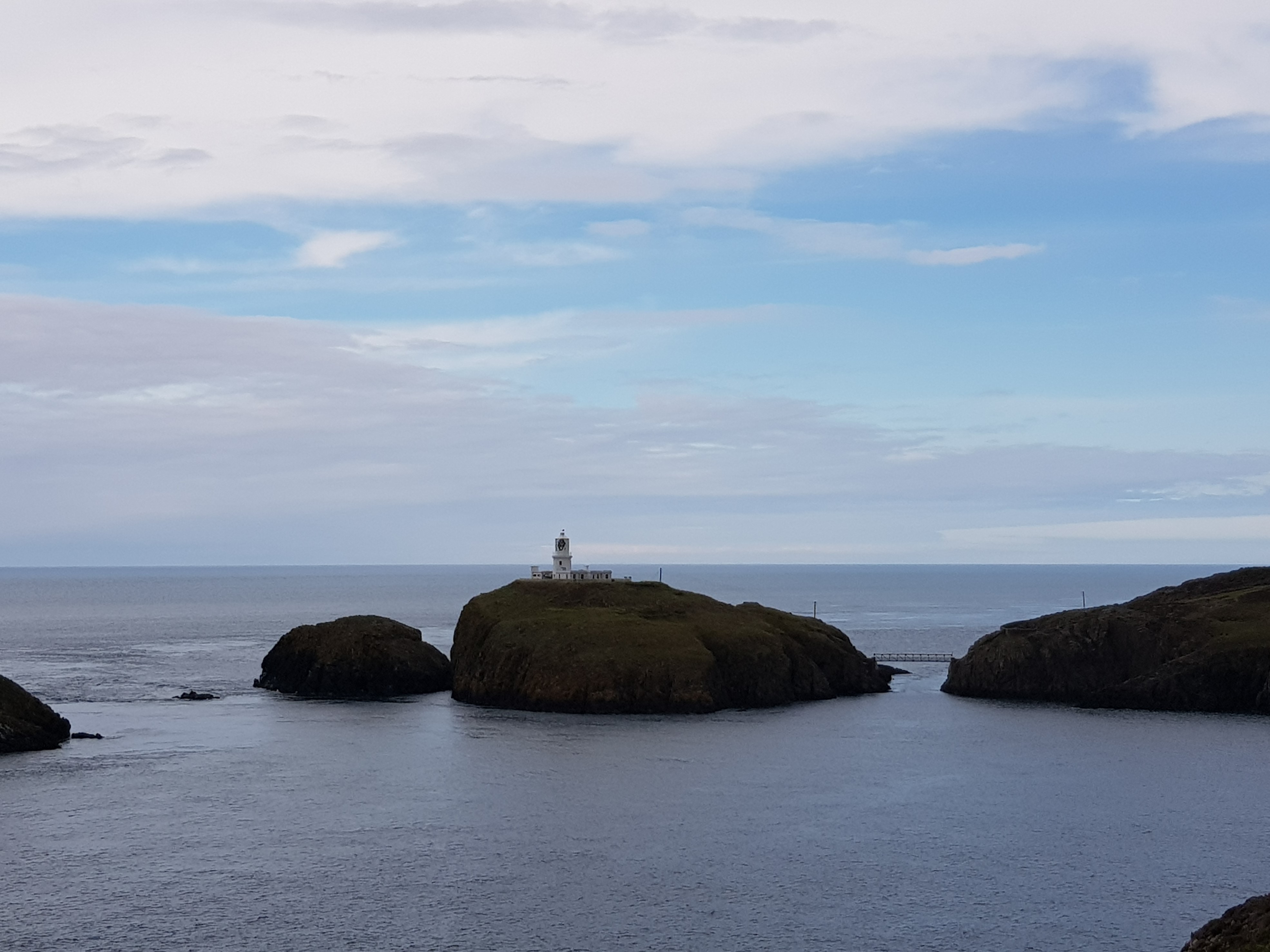 Today was the longest and hardest day of our walk. It started with a climb out of Abercastle, the path then took us through the fields, past two small and quiet pebbly beaches of Aber Marw and Aber Bach. Once past them, the path became more rocky and we were yet again surrounded by heather and bracken. Once we scramblled onto Pwll Deri, we caught our first glimpse of Strumble Head. It was mostly downhill from there until we reached Strumble Head lighthouse. Once past Strumble head the sun came out and made the last section to Goodwick that bit more enjoyable. This section took us mainly through fields, however, as they were fairly overgrown with bracken, it made it a long walk to Goodwick. Once again, we spotted some seals in the sea, this time around Aber Felin Bay. Another mile or so and we were on quite a steep descent into Goodwick, first through the fields then onto zigzag road into the town centre.

A bit of a grey start to our final day. Today’s walk started in the pretty fishing village of Lower Fishguard with its beautiful, colourful houses sitting on the quayside. We climbed up a steep road just on the back of Lower Fishguard, before we reached the path that took us to the remains of Fishguard Fort. From here it was a fairly easy walk until we reached the Dinas Island. Here you have a choice, you can either include the walk round Dinas peninsula or take a short cut to Cwm-yr-eglwys. The path round Dinas Head is quite easy with a gentle climb through bracken and heather all the way to the top of Pen y Fan. The path then continues round the peninsula before reaching  Cwm-yr-eglwys. Once there, we had a gentle climb up a tarmacked road before reaching a narrow path through the trees and hedges. From there the final section was quite easy, following an obvious path through the fields and woodlands until we reached the sandy and muddy beach of Parrog. Then it was just a matter of minutes before we arrived at final destination of our holiday – Newport – a lovely little town with its Norman castle and church.

Overall, the weather had been so kind to us most of the week, we managed to keep our waterproofs at the bottom of our rucksacks throughout the whole holiday.

We were pleasantly surprised how much the walk varied each day, the terrain and scenery was constantly changing. We met a few walkers along the way, but overall, the path was relatively quiet, making the whole experience a lot more enjoyable.

For more information on the Pembrokeshire Coast Path email us info@mickledore.co.uk or to speak to Monika or any of our walking holiday experts, call 017687 72335.

Our colleague Lynne walked the 95 mile stretch of the path from Dale to St Dogmaels in 2015. You can read Lynne’s story here.