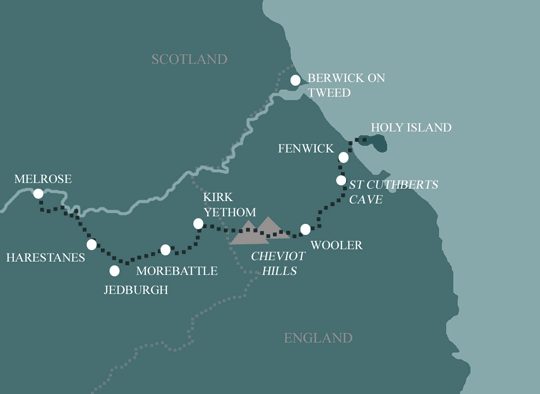 This is our longest holiday on St Cuthbert’s Way. Average days are shorter, with only one day over 11 miles, giving you time to appreciate the scenery and history along the way.

The walk starts in the historic market town of Melrose, and soon climbs steeply up the distinctive twin peaks of the Eldon Hills, giving great views over the Tweed Valley and surrounding border countryside. The route descends through the village of Bowden then on to the ruins of Dryburgh Abbey, sited on a meander in the River Tweed, and site of Sir Walter Scott’s grave. From here it’s a short walk to St Boswells.

A pleasant days walking through the rolling countryside of the Borders. The route follows the banks of the River Tweed for a while before heading off along the ancient Roman Road of Dere Street to the village of Harestanes, on the River Teviot. Jedburgh, an historic market town lies 2 miles south, where the 12th Century Abbey is well worth a visit.

The route briefly returns to the roman road before taking to an intricate network of paths and tracks through rolling farmland en route for the small village of Morebattle. On the way you will pass the ruined Cessford Castle, built in the 15th century by the Ker Clan.

A short day with plenty of ascent and descent, as the route meanders through the foothills of the Cheviot Hills. After crossing Kale Water (rivers are often referred to as ‘Waters’ in Scotland) there is a steep climb up Wideopen Hill, with excellent views in all directions. The route descends to Kirk Yetholm via the banks of Bowmont Water.

This is an easier day across moorland, agricultural land, and woodland. The route visits St Cuthbert’s Cave, an impressive sandstone cave where the monk’s body was hidden from the Vikings. There are great views along the coastline, including the famous Bamburgh Castle, as well as Lindisfarne itself.

This is a short, flat day, across the tidal causeway to Holy Island. The causeway is under water for 5 hours at high tide so you need to consult the tide tables. This is a unique walk as the causeway crosses the sands, with the ruined Lindisfarne Abbey and castle growing ever closer. A fitting end to a memorable walk!

The Rob Roy is a relatively gentle walk, on generally good paths, tracks and country lanes. With some walking experience and a bit of fitness this route is pretty straightforward.

Terrain: Most of the walk follows forests, loch shores, and the lower slopes of the surrounding hills.

What’s it like underfoot? Generally good – the route makes use of forest tracks, cycle paths, old railway tracks, and country lanes as well as unmade footpaths. There are couple of days where the route is a bit rougher, but nothing too challenging.

How Much Up & Down? Most days don’t involve too much ascent or descent, but there is one longer climb after Killin of around 400m.

Signposting: None – you need to use you map & guidebook.

Navigation: Pretty straightforward, on the lowland sections, but you may encounter hill fog or low cloud on a couple of sections, so you need to be able to navigate.

The picturesque town of Melrose is a great place to explore ahead of your Borders Abbeys or St Cuthbert's Way walk. In addition to the abbey itself there a host of fascinating places to see. The Eildon Hills watch over the town and the triple peaks are visible from much of the Abbeys Way. Why not spend half a day exploring them and look out over the borderlands.